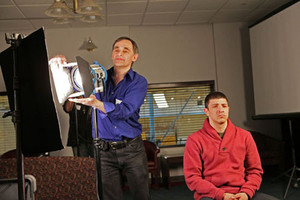 David Landau is available for lighting lectures, demos, seminars and workshops  at colleges, schools, associations and conferences. Presentatons can be 60 - 90 minutes, one day or a full weekend. The subject can be customized or can be selected from the following;

"Practical Lighting (and Electricity) Every Filmmaker Needs to Know"

Why light when the camera can see?  No camera can approximate what the human eye can see – contrast, color, dynamic range. We can’t shoot good pictures without good lighting, no matter how good the newest cameras are. Shooting under available light gives exposure, but lacks depth, contrast, contour, atmosphere and often separation. The story could be the greatest in the world, but if the lighting is poor viewers will assume it’s amateurish and not take it seriously. Feature films and TV shows, commercials and industrial videos, reality TV and documentaries all tell stories.  Lighting is a storytelling device that transcends language, culture and age – it is a universal language.

"Lighting for Reality TV: Doing as much as you can with as little as you can."

Lighting for Reality TV is a hybrid of fast working with few units and utilizing as much existing illumination as possible. in this session David Landau will discuss how the Project Runway series lights its interiors from the workrooms and hotel rooms of the contestants to the varied locations around NYC that only allow the crew to come in for very limited short time periods to light, shoot and wrap.

"Putting them in their best Light"

News, corporate and documentary videos almost always have interviews. But how the interview is lit will give a feeling to the viewer, and perhaps not the desired one. The lighting can make someone appear as either happy or sad, open or reluctant, an authority or someone to question. Usually the desire is to make the subject look as good a possible, so the lighting has to fit the face and the subject matter. And there are also the three "B"s to be aware of - bags, blondes and bald - which can complicate interview lighting. This workshop  demonstrates some standard practices and simple tricks of the trade for effective interview lighting.

One of the most common mistakes made by people trying to shoot a night scene is to make the scene very dark. All that does is make the viewer irritated because they can’t see what’s going on.  It removes them from the story because for a few seconds they wonder if it’s their eyes or the screen or if it’s supposed to be that dark. The human eye can actually see really well in very little light. So radically under exposing or making a scene dark is unnatural and not at all what the human eye sees. Our eyes adjust and can usually see just fine at night, except for details in the shadow areas.  So that is how we should light our night scenes, outdoors and indoors.

Often we shoot in real locations that have windows which can provide both problems and opportunities.  Knowing what they are and how to use them will allow a shoot to move faster and smoother.

Humans only look at something from one angle at a time. But there are often times that in order to make the shooting process move faster we will shoot with more than one camera and in TV studios at least three camras is the norm.  How we apply the lighting to accomodate more than one angle can often be a tricky thing if one is striving for more than just exposure.

What is a Gaffer and what do they do?
What is a gaffer? Where did the word come from? This workshop will answer these questions as well as describe the various ways a gaffer works with the cinematgrapher to create the lighting. Filmmaking is a team effort and the relationship between the gaffer and the DP is a prime example of collaborative creativity that makes the work go faster, smoother and better.

Interviews with professional cinematographers and gaffers,